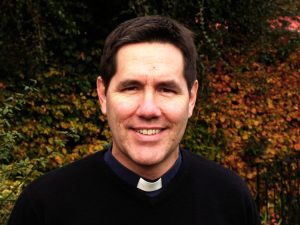 Dr Murray Harvey was Consecrated and Installed as the 12th Bishop of Grafton in Christ Church Cathedral, Grafton, on 29 September 2018.

Murray attended the University of Queensland where he trained as a psychologist, later working in various SE Queensland locations in this capacity before responding to a call to Ordained Ministry, training at St Francis Theological College. He was ordained Deacon in 1991 and Priest in 1992, both at St John’s Cathedral, Brisbane. He has a Doctor of Health Science degree from the School of Psychology, Deakin University, Melbourne. His research drew on insights from psychology to evaluate selection processes for the Ordained Ministry in the Anglican Church. He is still involved in research and teaching in this field. Much of his ministry has been served in the United Kingdom, where he served as Vicar of the Glen Group of Parishes in the Diocese of Lincoln. The Glen Group is three rural parishes, Pinchbeck, Surfleet and West Pinchbeck, two of which have churches dating from the 12th Century (St Mary’s Pinchbeck and St Laurence’s Surfleet), and is served by a large team of Authorised and Licensed Lay ministers. In the Church of England, he also had responsibilities with the wider church, serving as the Bishop of Lincoln’s nominee as Bishops’ Selection Adviser, which involved participating in the discernment process for those offering to train for the Ordained Ministry in the Church of England. This exposed him to a variety of theological traditions in the various Dioceses and Theological Colleges across England.

On returning to Australia he served as Rector of St Mark’s Bonney Avenue, Clayfield and, from 2014, Residentiary Canon of St John’s Cathedral, Brisbane. The parish has a flourishing children and families ministry. Developing partnerships with local schools, including St Margaret’s Anglican Girls School, Clayfield College and Eagle Junction State School, were also a feature of his ministry.  In Brisbane Murray had several diocesan responsibilities, including serving as an Examining Chaplain, Diocesan Nominator, member of the Professional Standards Board and member of Cathedral Chapter. As part of a team known as the Archbishop’s Vocations Task Group, he helped develop processes and events to encourage Anglicans to think about their Christian vocation, including the development of liturgical, video and other resources as well as Social Media campaigns with a vocations theme.

Response regarding Israel Folau Comments 3 May 2019

Bishop Murray can be contacted at bishop@graftondiocese.org.au or by phoning 02 6642 4122 (Tuesday to Friday).