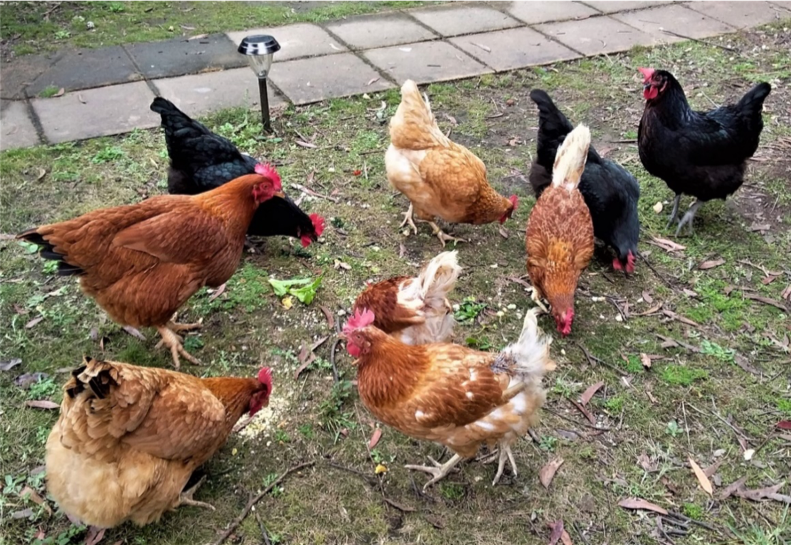 Pictured are some of my hens. Two are New Hampshire Reds and the rest are various cross breeds. The hens sometimes graze together and sometimes apart. At night I lock them in the safety of their houses. Some go in by themselves while others wait outside for me to pick them up and put them in. If I am late and it is dark, all will be inside on their perches, but a few, when they see me, immediately come out into their yard and wait for me to pick them up and return them to where they were.  At night, some hens sit together while others prefer to sit by themselves. They are all unique and important, at least to me!

At the end of May, a video of George Floyd, a black African-American, being killed by a policeman in Minneapolis, USA, was shown on television. It raised an international awareness of the unjust treatment of people because of their race and colour. Since then “Black Lives Matter” protest rallies, peaceful and destructive, have taken place in many countries in spite of COVID-19 restrictions. In Australia, these protests were extended to include the high number of Indigenous people in jails and their deaths in custody.

Many years ago, I was walking along a footpath in Sydney with an Aboriginal teenage boy who was the cousin of a friend. Some policemen passed by on the other side of the street. My companion immediately told me that if I had not been with him he would have been stopped and questioned by those policemen. I could hardly believe it, but accepted it as how things were, and did nothing.

We can agree that racist actions are wrong, but how can we actually change what is done and the attitudes of people who accept them as part of life? In particular, how can we change our own perspectives so that we accept people of other races, cultures and colour as our brothers and sisters, children of God who created us all?

As Christians we are commanded to love one another, not just our friends but all people, even our enemies. In Jesus’ parable of the Good Samaritan in Luke 10:29-37, we are not told whether the man attacked was a Jew, Gentile, black or white. He was probably in a state that made it difficult to tell. But it was immaterial to the man who saw him and ministered to him. That man, whose compassionate behaviour was praised by Jesus, was a Samaritan – someone usually despised by Jews. In the parable he crossed fear and social boundaries in order to help a human being in need, and became an example of loving a ‘neighbour’.

When we study Jesus’ behaviour towards the Samaritan woman at a well in Samaria in John 4:7-42, we find him crossing gender and ethnic barriers which could have controlled his actions. Jesus, a Jew, asked a Samaritan woman for a drink of water. He then proceeded to treat her as an equal by having a long theological discussion with her. This ended by Jesus offering her “living water” and admitting that he was the Messiah she and others were looking for.

On another occasion, in Matthew 8:5-13, a centurion, an officer in the Roman Army, stopped Jesus to ask for healing for his servant. As a non-Jew and a member of the controlling foreign power in the country, what was the centurion doing? Jesus offered to go with him to the sick man, but the centurion said he was not worthy for that, but if Jesus wished he could cure the servant from a distance. Jesus was amazed at such faith shown by a foreigner. More boundaries were crossed and people accepted and respected as equals.

All people are created by God in the image of God regardless of the colour of their skin, beliefs they hold, culture in which they have grown up or particular disability they may have. Further, we believe that God loves and cares for all of creation, human and non-human, and we are called to do the same. This may require some costly action on our part.

To begin to change from accepting racist behaviour, we could try to imagine what it is like to look at situations through the eyes of another. Such activity involves listening carefully to life experiences told by individual people of a race or culture different from our own, and/or reading their stories.

The other day one of my hens was on the veranda of our house. I called to her as I was about to feed the hens with their evening meal. She began to come to me, stopped, and turned back. She did this several times. Then I learnt that a large sponge had fallen down near her a little while before, and I began to understand the problem from her perspective. I went to her, picked her up and carried her trembling body past the place that frightened her.

When we actually witness public acts of racism, can we say or do something to show they are neither ‘normal’ nor acceptable? For example, if someone with dark skin or of Asian appearance is the last to be served in a shop, do we step forward and question what is happening?

In our daily conversations, we might hear opinions and assumptions expressed that are racist and unjust. These are opportunities for us to speak up, and perhaps contribute to the healing of relationships between people, instead of remaining in silent acquiescence.

If we can get to know a person of a different race and culture from our own, and learn what is important for them in their lives, our attitude towards them is likely to change. We shall move to a different place, experience a new friendship and see life from a view-point that expands our vision and understanding. In this position it will be easier for us to accept, appreciate and love another as an equal human being and member with us of God’s family. In other words, we shall begin to act in a way that reveals the truth that all lives matter and are important in God’s amazing world. Such behaviour challenges and changes society’s acceptance of racism as ‘normal’, preventing it from forming and controlling us and others.